Can you believe it?  We survived the holidays and are well on our way into 2014.  I swear just about the time I get used to writing the current year, the next one ‘happens’ upon us. 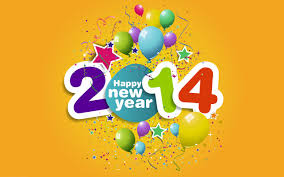 Hopefully this post has you gearing up for an exciting New Year.  I know I’m excited, or at least ready to figure out how to juggle two kids and keep my sanity.  After having Sophia in September (and getting my VBAC/HBAC), the months just seemed to fly by!  I barely had time to blink before it was time to pack up to head to Houston for…

Josh and I alternate the holidays every other year, so this year had us in Houston with my sister and Missouri with Josh’s family.  Remember our Phoenix trip last year?

It was a very exciting time because my sister was due to have her second son on December 5th and we thought for sure he might make an appearance while everyone was there…but alas, he did not.  That was okay though, because we all had a nice time and my sister got some manly help setting up the Christmas tree while she rested.

In true paleo fashion, I held strong to trying to eat better for the holidays, despite falling off the bandwagon over the past several months.  I made several new recipes and am excited to share them with you.  Not only did I make several desserts, but I made some yummy stuffing that even my non-paleo brother-in-law approved of!  That’s success in my books, folks.

Along with food, came an inadvertent tradition of seeing Z00 Lights.  Last year, we saw the Phoenix Zoo Lights and were amazed at the over 1 million lights that transformed the zoo!  This year, I happen to discover that the Houston Zoo was having their own version, so I wanted to make sure we checked it out.  My sister has a son, Dillon, who’s eight months younger than Emma, so we knew the two of them would have a blast.

We bundled everyone up, including Sophia in my Boba carrier, and headed to the zoo.  We had a great time looking at the lights, dancing and singing to Christmas music, and finished with a hot dinner at Pappasito’s.  I even brought along my own almond milk hot chocolate, which was delicious!  Ya’ll know I’m always on the hunt for dairy-free versions of just about anything.

After leaving my (still pregnant) sister and her family behind, we headed back to Dallas to begin decorating our house for the annual Celiac Holiday Party. 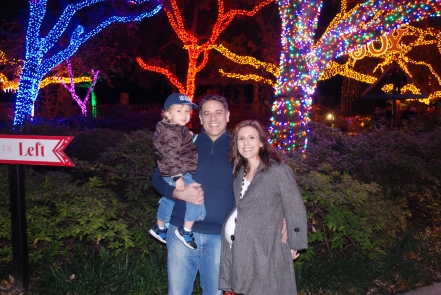 Our support group, the Gluten Intolerance Group (GiG) of Greater Dallas, holds a holiday party at one of the member’s houses each year, and this time we volunteered.  This is an event where those of us with Celiac disease or gluten intolerance, are in utter gluten-free heaven!  I remember going to the first one asking, ‘Is this gluten-free?’  Of course it all is, and since my paleo journey began over two years ago, there were several paleo options for many of us who don’t tolerate dairy or grains either.

I let Josh smoke the ham and brisket (on the Big Green Egg), while I busted out with raw paleo desserts.  Both included pumpkin, since I finally got around to roasting my two pie pumpkins, and I had about 10 cups to mess around with.  I think they turned out quite tasty, and in true holiday party fashion, we ended up with a boat load of desserts! 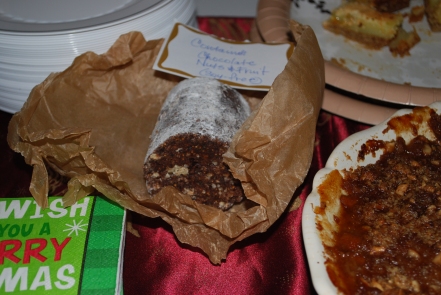 Once we wrapped up that party, it was time to gear up for our trip to Missouri for some Christmas fun.  But before that could happen, I wanted to make a quick trip to Houston to meet my newest nephew, Trent Vincent.  The little stinker ended up coming on December 4th (just 3 days after we had left) and rather quickly.  Lucky (or unlucky) for my sister, he came so quick that she didn’t have time to get her epidural.  Turns out we both had drug unassisted births…granted hers was at the hospital and mine was at home.

What mattered most was that mama and baby were well and ready for us to come visit.  It was cute to watch Emma and Dillon fight over holding both Trent and Sophia.  I don’t think I would have ever guessed that a two and three-year old couldn’t get enough of their siblings…but I have learned that children will surprise you in ways you never thought possible.

I unfortunately had to wrap up my trip (since Missouri was right around the corner) and head back home. It was nice to see my sis for a few days, but once I found out that my grandmother and great-uncle were headed to my parents, I decided to ‘swing by’ Austin instead of rushing home.

My grandmother lives in Corpus Christi, so I knew it would be some time before she finally met Sophia, so I decided to head west instead of north.  I am very glad I did because you can’t pass up those moments of a four generation photo.  This one was more impromptu than our first (think Olan Mills, baby), but all the same, it had to be done.

A bonus to the trip was that I got a night out in downtown Austin!  Let’s just say this mama was excited to  hit 6th street with her bestie, and show her cousin (who just moved down from NY) how we do it in Texas, ya’ll.

We were excited that Christmas brought us to Missouri this year, since we knew a lot of family members would be there, and it was our chance for them to meet our sweet baby girl.

We usually draw names since Josh’s family is so big, but this year we did a version of White Elephant (where you can steal presents from each other) that actually turned out successful!  The highlight was Josh’s grandmother stealing a collapsible work bench from him, after he stole it from his father (her son).  Josh’s uncle, to this day, is still trying to figure out why she would steal from her grandson.  Hey, rules are rules despite your age.

After leaving his grandparents, we headed to Jefferson City to celebrate Christmas with Josh’s aunt.  There, Emma opened the coolest gift a 3-year-old cooking novice could get.  She got her very own working mixer!  Okay, maybe I was a little more excited than she was, but after her 2 minute demonstration video, the girl was seriously ready to whip something up.  I think we really do have a little chef on our hands, and am looking forward to her making Thanksgiving next year!  Ha!

Much to our dismay, we had to pack up yet again to head home…hopefully for the last time for a while.  We all said our goodbyes and made the ‘what should have been 8 hour but was actually 13 hour drive’ back home to Big D.  Luckily, we found some lights in Muskogee, OK to break up the monotony.

We loved seeing his family and spending time with everyone, but it’s always nice to get home.  I couldn’t be happier to be in my own bed and have the girls finally out of the car.  They were such troopers, but I know all that driving in car seats made for a much needed visit to the chiropractor! 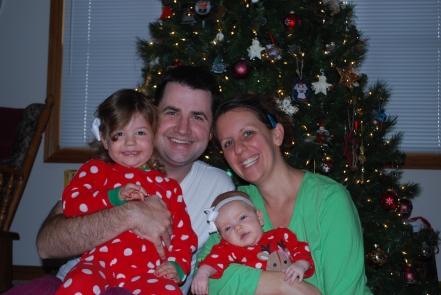 How were your holidays?  Do you have any family traditions or did you travel anywhere?  Sometimes it would be nice to stay put, but that’s just not the way we roll in our family.

Here’s hoping you and yours had a wonderful holiday (if you celebrate it) and that you look forward to the New Year.  I know there are many exciting things that are yet to come, so hold on, get ready, and let’s experience it together! 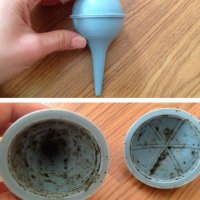 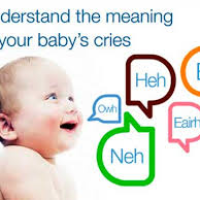